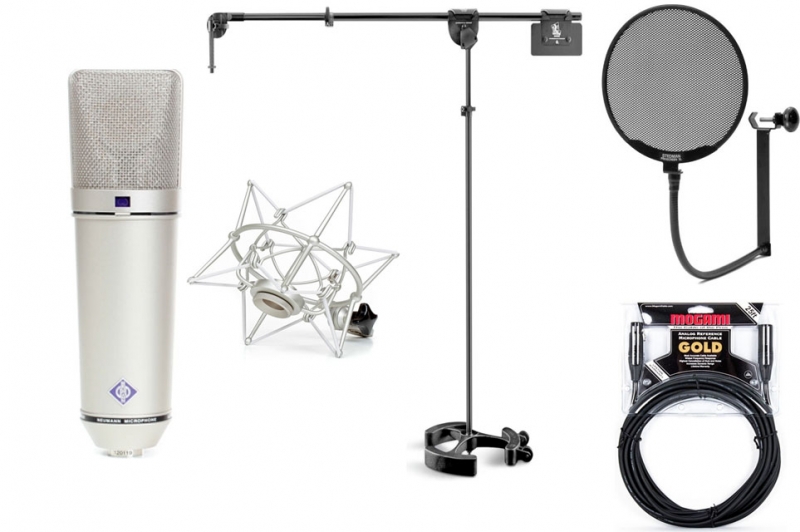 The Neumann U 87 Ai is probably the best-known and most frequently used studio microphone the world over. Its smooth and refined sound is as iconic as its elegant exterior design. The U 87 Ai is the standard microphone for speech and vocals. Three polar patterns plus pad and low cut options make it adaptable to a wide range of applications.

Omnipresent Yet Unique
The Neumann U 87 Ai is a true legend. Introduced in 1967, it has shaped the sound of countless hit records for the past 50 years. And when those hits were announced on the radio, many a DJ sat before a U 87 Ai. The legend continues: To this day, no professional recording studio is complete without a Neumann U 87 Ai.
The U 87 Ai is the epitome of a large diaphragm condenser microphone. Its tapered body and iconic headgrille design have become part of the collective consciousness: This is what a studio microphone looks like. The same is true of its sound: The U 87 Ai represents studio quality; it has become the gold standard by which other microphones are measured.

What sets the U 87 Ai apart is its unique combination of linearity and character. Although its on-axis frequency response is remarkably flat, it does exert certain charisma. It just sounds right! This makes the U 87 Ai both versatile and instantly recognizable.

Classic Neumann Engineering
Technically speaking, the U 87 Ai is a traditional design whose timeless formula has remained unchanged for decades. The U 87 Ai uses the same dual diaphragm condenser capsule design as its predecessor, the no less legendary U 67 of the early 1960s. Its head amplifier, too, is based on the same design principles as its tube driven predecessor, but the U 87 Ai realizes them by means of a unique FET circuit with a minimal signal path and a transformer balanced output, ensuring maximum signal integrity and high common mode rejection.

The result is a studio microphone of unmatched clarity. Its natural sound and unique midrange presence make the U 87 Ai the ultimate vocal microphone, praised by singers and engineers alike, as well the prime choice for speech applications, such as voice over, dubbing, and audio books. Due to its balanced response in each of its three directional patterns, the U 87 Ai is also a versatile microphone for anything from acoustic guitar to drums overheads. Due to its solid bass response and excellent midrange detail, it is often seen in front of bass and guitar cabinets. For classical recordings, the U 87 Ai is frequently used as a spot mic for soloists, e.g. cello. A stereo pair of U 87 Ais is the preferred choice of many engineers for recording piano in virtually any genre from pop and jazz to classical music.

Latch Lake micKing 2200
The micKing 2200 boom stand is our most recommended stand. It features all of the outstanding original patented features of the micKing including: the world's strongest boom clutch in its class, unique patented base, Spin Grip Mic Mount, movable counterweight and revolutionary lever lock adjustment systems. However, the 2200 differentiates itself with just one telescoping extension on both the boom and the mast. It performs flawlessly in all positions with the lightest to the heaviest of microphones. The MK2200 now utilizes the NEW 29 lb 16" base that comes standard on the MK3300. This foundation enables its immense strength and flexibility. The MK2200 is the perfect stand to prepare you for just about anything that comes your way.

Stedman PROSCREEN XL Metal Pop Filter
The Stedman Proscreen XL is an advanced patented pop filter design that offers a large 6 inch diameter screen with an ultra-fine rubber surround that does not interfere with vocal recording sound quality. Setup is easier with its extended clamp and a 13 inch heavy duty adjustable gooseneck. The Proscreen pop filter is far more effective than fabric filters. Instead of simply diffusing bursts, the Proscreen redirects airflow downward away from the microphone capsule. Even close vocal work will not allow popping "P's" or "B's" to reach the microphone. The large openings in the metal screen allow vocal sound to pass through to the microphone unobstructed and uncolored, preserving critical recorded detail.

The Proscreen XL is a professional high quality pop filter that will provide excellent burst prevention for music vocal tracks and voice over recording applications.

The patented Proscreen filter material and the high strength metal alloy clamp are both finished with a durable powder coating that will last a lifetime of recording sessions.The gooseneck is covered with a heavy duty vinyl shrink material keeping the flexible gooseneck protected and offering lower noise while adjustments are made. Stedman Proscreen's feature a high quality clamping knob with a soft Nylon tip to protect valuable studio equipment from scratches.

Write a review about the Neumann U87 Ai Z Set with Latch Lake 2200, Mogami Gold Studio 25' and Stedman Popscreen XL