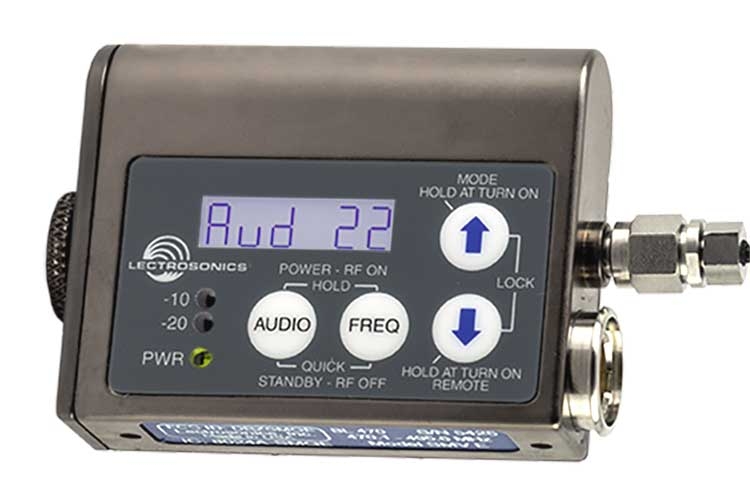 The input section features the unique servo bias input circuitry with a standard TA5M type jack for use with electret lavaliere mics, dynamic mics, or line level signals. A DSP-controlled analog audio limiter is employed before the A-D converter. The limiter has a range of more than 30 dB for excellent overload protection and a dual release envelope that makes the limiter acoustically transparent while maintaining low distortion. The limiter recovers quickly from brief transients, with no audible side effects, and also recovers slowly from sustained high levels to keep audio distortion low while preserving short term dynamics.

Input Limiter
A DSP-controlled analog audio limiter is employed before the analog-to-digital converter. The limiter has a range of more than 30 dB for excellent overload protec- tion. A dual release envelope makes the limiter acousti- cally transparent while maintaining low distortion. The limiter recovers quickly from brief transients, so that its action is hidden from the listener, but recovers slowly from sustained high levels, to keep audio distortion low and preserve short term dynamic changes.
The bicolor LEDs indicate limiter activity accurately to assist in setting the input gain for optimal signal to noise ratio and dynamic range.

Circulator/Isolator
The transmitter RF output circuit includes a specialized RF device called a "circulator/isolator" or simply "isolator" using a magnetically polarized ferrite to allow RF signals to pass through to the antenna, but block them from coming backward into the transmitter output section. This greatly reduces RF intermodulation produced in the transmitter output stages when multiple units are used in close proximity (a few feet apart). The isolator also helps protect the output stage from electrostatic shock deliv- ered to the antenna. Isolators are common in broadcast and commercial applications, but because of their high cost it is unusual to find them in wireless microphone systems.

GORE-TEX Vent
In special circumstances it is possible for moisture to be pulled into the housing when a unit is moved from
a warm, damp operating environment, turned off and stored in a cool place. As the warm air inside the unit cools a vacuum is created, pulling air in past the exte- rior of the housing, bringing moisture with it. A special vent in the battery door prevents a vacuum from being created by allowing air to pass but blocking the passage of water.

DSP-Based Pilot Tone & Compatibility
The DSP generated pilot tone eliminates the need for fragile crystals and allows a different pilot tone frequency for each of the 256 carrier frequencies in the tuning range of the wireless system. Individual pilot tones significantly reduce squelch problems in multichannel systems where a pilot tone signal can appear in the wrong receiver via intermodulation products.
The DSP also offers compatibility modes to allow back- ward compatibility with all Lectrosonics IFB systems, 100/200 Series systems and analog receivers from some other manufacturers in addition to its native Digital Hybrid operating mode.