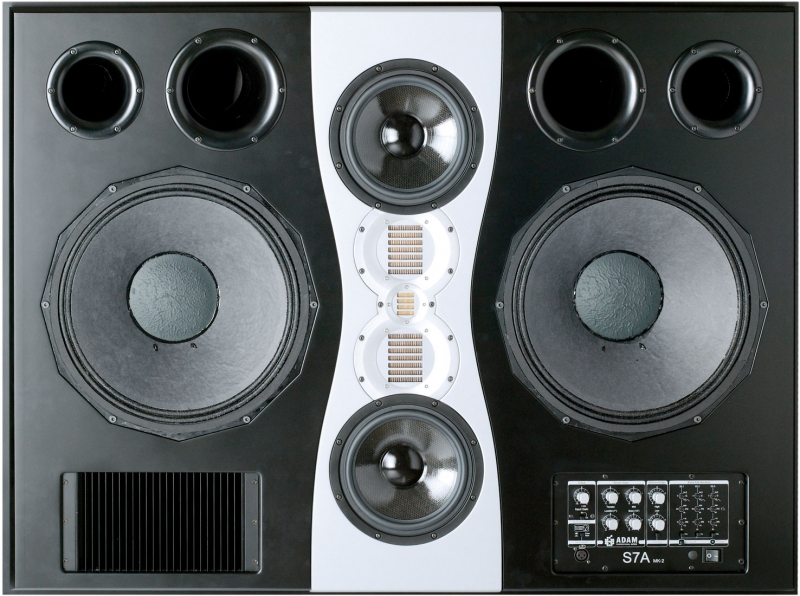 Do you want to see other ADAM products? 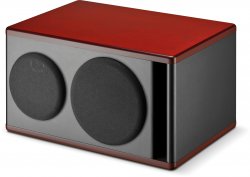 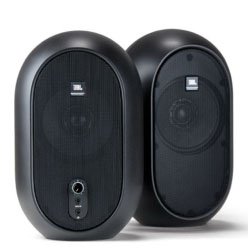 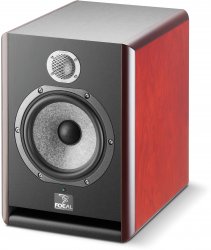 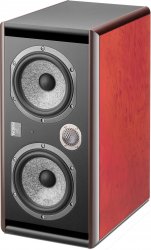 The ADAM S7A MK2 main monitors are designed for large control rooms and film studios. They use a symmetrical concept to increase the realistic reproduction.

ADAM has avoided the typical overloading of the bass range that can often be found in main monitors. A wide horizontal radiation characteristic and moderate vertical beaming are crucial factors to minimize the impact of ceiling and floor reflections and achieve neutral sound reproduction at high volumes.

Extended D'Appolito design
A total of seven individual speakers were arrayed so that gradual transitions could be made possible given the size of the cabinet. In addition, we chose a horizontal symmetry that can be described as an extended D'Appolito configuration. This kind of design combined with suitable transition frequencies and filter slopes results in radiation patterns that lead to very consistent reproduction characteristics in the horizontal center position. At the same time, vertical dispersion is reduced so that reflections from the ceiling, floor or mixing console are greatly reduced. Thus, so called 'early reflections' have less chance to interfere, which leads to significantly better stereo imaging and a more three-dimensional sound.

Impulse Coupling
Further progress in development was achieved by the use of Alucore® panels, an extra firm component material with an aluminum honeycomb core. All drivers of the S6X and S7A Mk2 are mounted on such panels, which considerably improves mechanical coupling between the drivers and the cabinet.

Amplification
An active-built complex, large top-class monitor has not yet been achieved because of the challenge presented by the heat generation of the high power amplifiers used in this type of device. In recent years, PWM (Pulse Width Modulation) amplifier technology had significantly improved in that only a fifth of the generated heat has to be dissipated - a real breakthrough in terms of reliability and durability. This allows the S6X and the S7A Mk2 to be flush mounted into the studio walls, since all the heat is emitted through the front of the cabinet and the heat sink temperatures remain moderate. Together with the built-in protection circuits the low, constant temperatures of these amplifiers result in reliable performance not possible with traditional AB amplifiers.

Control panel
In addition to the input sensitivity that can be adapted in the range of ±10 dB, there are four other level controls that affect the individual amplifier modules. Shelving filters at both ends of the frequency spectrum and three fully parametric equalizers help compensate for standing waves in the control room. The EQs can be inserted separately or grouped so their effect can be directly evaluated.

In large film score mixing rooms, there may be a need to simulate theater sound. Based on the ISO 2969 standard, the Dolby X-Curve is used to achieve this. This filter engages a 3 dB per octave roll-off starting at 2 kHz. Below the front input jack is a selector switch that activates this filter, eliminating the need for external processing during the film mix. In addition to the rear input there is an additional switchable XLR input on the front panel, allowing work with the monitor regardless of set-up.

S7A Mk2 - the benchmark in Professional Monitoring
The S7A Mk2 is the larger version of the S6X and consequently one of the most impressive studio monitors. With a total of 1500 Watt onboard amplification power this monitor reaches SPL peaks of 138dB per pair at a distance of 1 meter. The larger woofer diaphragms provide more bass volume even at frequencies as low as 20Hz.

For the time being, we feel the S7A Mk2 is the benchmark of what is possible in the field of professional monitoring. It combines all of the ADAM innovations in the areas of transducer technology, PWM amplification, more detailed control options and the best materials available with an unmatched level of power and performance. This combination of maximum volume with the utmost precision in all sonic areas could only result in one thing: the ultimate reference in professional monitoring. The S7A Mk2 is the result of ADAM's quest to offer the best possible active studio monitor available today.