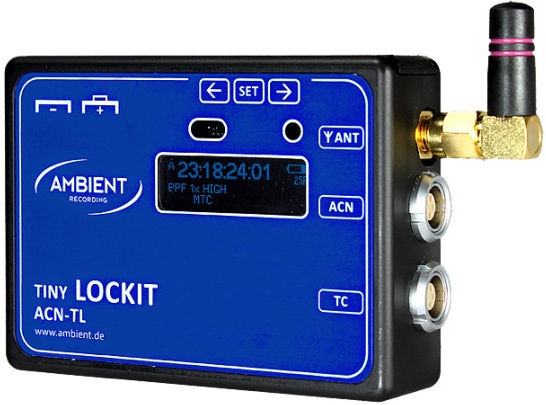 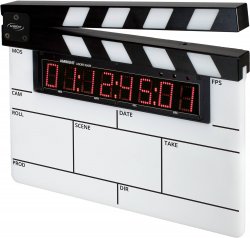 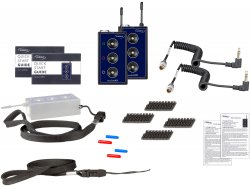 The Ambient ACN-TL is an even smaller version of the original Lockit. It is a Timecode generator and transceiver.

Except for the sync signal output, it comprises the full functionality of the Lockit, including Ambient ACN support, auto tuning, wireless jam syncing as well as metadata transfer and logging.Thus the ACN-TL also can be used as fully-functional, generator-buffered timecode transceiver. This provides the stability of an Ambient Lockit generator with the flexibility of a wireless TC system but without the fear of dropouts.
In addition, it also offers a variable timecode output level for recording TC on audio track. Due to its smaller form factor, the ACN-TL is especially suitable for applications on small cameras and in setups where a sync signal is not required. With it's machined, pearl blasted and anodized aluminum body, the Tiny Lockit can easily withstand the roughest production conditions.

The built-in ACN enables for 0.0ppm drift, wireless tc & remote control
The integrated transceiver and the 2nd Lemo socket can be used to interface with the ACN system via USB, RS232, or GP I/O. It also allows the ACN-TL to work as a fully functional, generator buffered wireless timecode transceiver. With firmware version 3.1 or higher the new c-jam mode does not stop after the first jam. It will resend smaller timestamps every 4 seconds.
All receiving units now compare their internal generated timecode with the highly accurate timestamp and pull up or down the generator speed until they are perfectly matched. This way a drift between all ACN devices on set can be avoided completely. When used in a network with a Master Lockit, all ACN-TL units and other ACN Lockits can be displayed, named and remote controlled via the Master Lockit web interface.

Use your Tiny Lockit as computer Timecode Interface
Plugged in into a computer, the Tiny Lockit transforms into a highly accurate Midi Timecode Interface with LTC / Midi Timecode conversion. This enables ACN-TL to sync multiple cameras with a Pro Tools workstation.This is made possible by the ACN-TLs flexible, fully programmable FPGA architecture.
A front loaded OLED display will give instant visual feedback about the current configuration and assist while moving through the menu to make adjustments. This is now done on the fly with an easy to operate one-finger navigation system - no more need for screwdrivers or powercycling the unit.