Do you want to see other Apogee products? 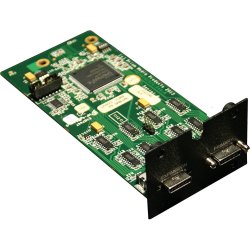 Extreme Apogee Quality With Dante Connectivity
Customers can now use the amazing sound quality of Apogee's Symphony MKII combined with the most powerful networking solution from Audinate featured in many large scale installations in Broadcast, Live, and Post Production venues.

The Symphony MK II system can be configured with a number of custom options ranging from 8-32 analog I/O channels. Symphony MK II with DanteÂ™ allows up to 32 channels with ProTools and redundant Dante connectivity to be fitted into a single two space rack device providing the smallest footprint available with this feature set.

The Latest Evolution of the Symphony I/O MK II System
Symphony I/O MK II was been nominated for a 2017 TEC Award and is praised by customers and press internationally as the leading professional audio interface to set new sound quality standards for multi-channel recording.