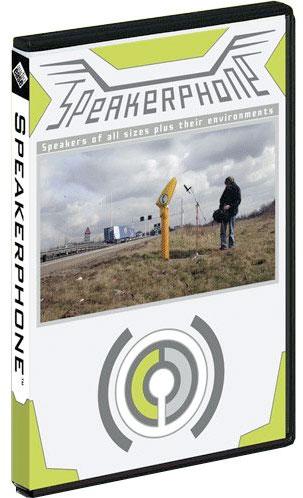 Audio Ease Speakerphone 2, powered by Altiverb, combines a wealth of effects including a convolution engine that uses actual samples of hundreds of original speakers.

Authentic speakers and their environmnents
A bad GSM connection on a busy sidewalk, a bullhorn with feedback and a helicopter overhead, or a 1952 rockabilly guitar amp in a recording studio live room: The Speakerphone audio plug-in gives you authentic speakers of any size together with their natural environments.

All the walkie-talkies, distant transistor radios, upstairs TV sets, bullhorns, cell phones and guitar cabinets you will ever need. Speakerphone (Mac , Windows, iLok or challenge response) will add dial tones, operator, static, and you can select from a wealth of ambiences on either the caller or receiver's end.

400 speaker impulse responses, 23 microphones, 106 'Covers' (from blankets to car trunks), 53 Altiverb rooms and outdoor spaces, 5 gigabyte of ambiences and sound FX, and 12 DSP modules from Leslie to GSM compression, conveniently presented to you in well over 500 presets.

Just over a year has passed since the introduction of Speakerphone. Speakerphone has quickly become a household name in audio post production and music studios. Speakerphone version 2 has a new cleaner look, new features, many newly sampled guitar amp cabinets, antique phones, toys, answering machines and megaphones. Added is a microphone simulation module that hosts microphones ranging from Royers to toy mics.

The Speakerphone 2 is one that's called 'Coverup'. Coverup can place any sound inside tin cans, cardboard boxes, under blankets or in the closed trunk of a car. Speakerphone 2 adds presets that switch via automation, an extensive LFO and envelope following section for controlling virtually all parameters of Speakerphone, and a Leslie speaker module.

Write a review about the Audio Ease Speakerphone 2