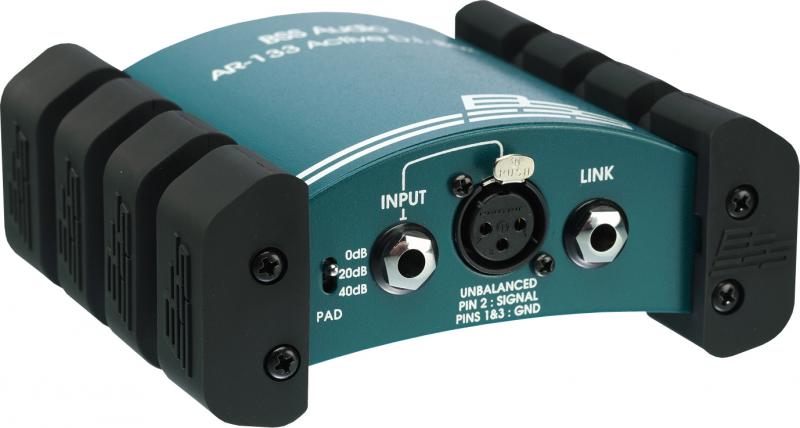 The AR-133 DI boxe has a parallel feed from the inputconnector so that the instrument may be simultaneously connected to the AR-133 and the amplifier.

The unit includes phantom power and battery supplies as standard. Should the phantom power from the console fail or be accidentally switched off, the AR-133 automatically switches over to the internal 9V battery providing uninterrupted use.

The unit is housed in a rugged aluminium extrusion case, with robust polyurethane end-cheeks which give the AR-133 a very distinctive look.

Input connectors are both 1/4" jack sockets and an XLR socket, the latter meaning that the AR-133 can be used to convert unbalanced signals to a balanced output on XLRs throughout.

The arched case allows cables to run back underneath the unit from the end for neat cable management.

Input attenuation is 0, -20 or -40dB, making the box suitable for instrument, line or amplifier levels on inputs. On the output side, a ground-lift switch is provided for quick solutions to ground-loop problems.

The AR-133 uses an enhanced version of the same audio path as the AR-116, now regarded by many people as a reference standard. The sound quality is legendary, particularly on acoustic and bass guitars.

Numerous applications can be satisfied by the AR-133. For example, as well as the traditional guitar use, the AR-133 can be used with keyboards, DJ consoles, amplifier outputs, and other electronic sources.

An additional bonus is the ability to use the AR-133 as an active balancing device.

Write a review about the BSS AR-133