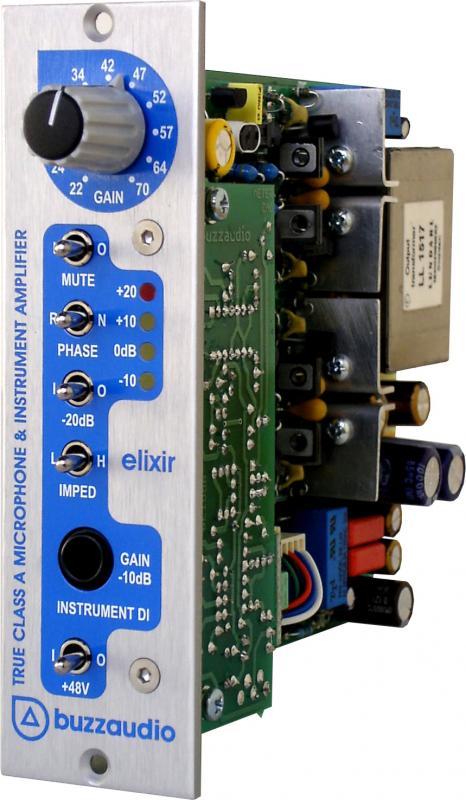 Elixir is a mic preamp for 500 series. Standing out from the crowd, the elixir offers exciting and vibrant tones in the 500 Series format.

audio path quality
All discrete signal path using our class-a BE40 amplifiers at the input and BE50 high current line drivers to excite the Lundahl LL1517 output transformer. The topology is quite different to most other mic preamps in that it is balanced from input to output. The instrument input features our BE43 "bootstrapped FET" high impedance interface that really pumps as a bass DI.

mojo not mud
The elixir is an ideal compliment to other 500 series preamps that feature a dark sound. The wide frequency response and fast transient response plus color from the output transformer generate a "warm sweet liquid" sound quality that sets it apart from that crowd. These attributes make the elixir particulary good at recording percussion, drums (you need to hear it on snare), vocals and stringed instruments.

specs that matter
As with all our preamps, the elixir noise floor is as low as we can make under the laws of physics and there is plenty of gain for low output ribbon and dynamic microphones. The output headroom at +34dBu is outstandingly unique in the 500 series format, and adds a feeling of real effortlessness to the sound quality. The transformer-less mic input presents a "non-reactive" load to the microphone which means you hear exactly what the microphone manufacturer intended, without the unpredictable nature of an input transformer.

GAIN - 41 detented pot that sets gain between +22 to +70dB.
PHASE - normal or reverse polarity switched at the input.
-20dB - this switch introduces a 20dB pad right at the mic input for high level signals.
HI Z - selects high or low input impedance and this affect both the mic and DI input.
+48V - switches on the phantom power for condensor microphones and powered DI boxes.
METER - four leds give visual indication of peak output level

Write a review about the Buzz Audio Elixir