Sorry, the product Focusrite Rednet 2 is not available anymore on Studio Economik's website.

Do you want to see other Focusrite products? 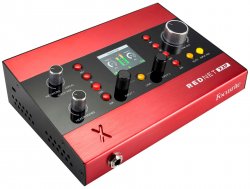 RedNet 2 adds 16 remote-controlled analogue channels in and out to your RedNet network and can be located anywhere you can run an Ethernet cable.

RedNet 2 can be used simply as a means of converting 16 channels of audio and delivering it some somewhere else on the network at near-zero latency. If you need to connect RedNet 2 to your computer there are three methods:

What is RedNet
RedNet is Focusrite's flagship range of modular Ethernet-networked audio interfaces that harnesses the power of Audinate's tried and tested Dante digital audio networking system to bring studio quality sound to any modern audio application. Fundamentally RedNet is an extremely scalable, near zero latency audio distribution system that can be used to expand I/O channel count, interface digital components, and/or bridge between Pro Tools|HD or MADI and the Dante audio network.