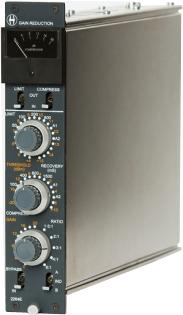 First launched in 1974, the original 2264A Compressor/Limiter was a worthy successor of the 2254, with shorter recovery times and more precise controls.

However a far more transparent class A/B amplifier stage was used instead of the much beloved class A one. By today standards, something was lost in the way. Making our rendition to the 2264 with the class A amplifier became an obvious task. And here it is, the 2264E - Enhanced 2264-, gain control circuit of the 2264a with a 2254 audio path. Best of both worlds!

Hand crafted exactly as in 1974. No corners cut. Electrically and mechanically compatible with all other 10 series modules, the 2264E can be used in 80 series consoles, third party 8 channel frames, etc.

Write a review about the Heritage Audio HA2264E