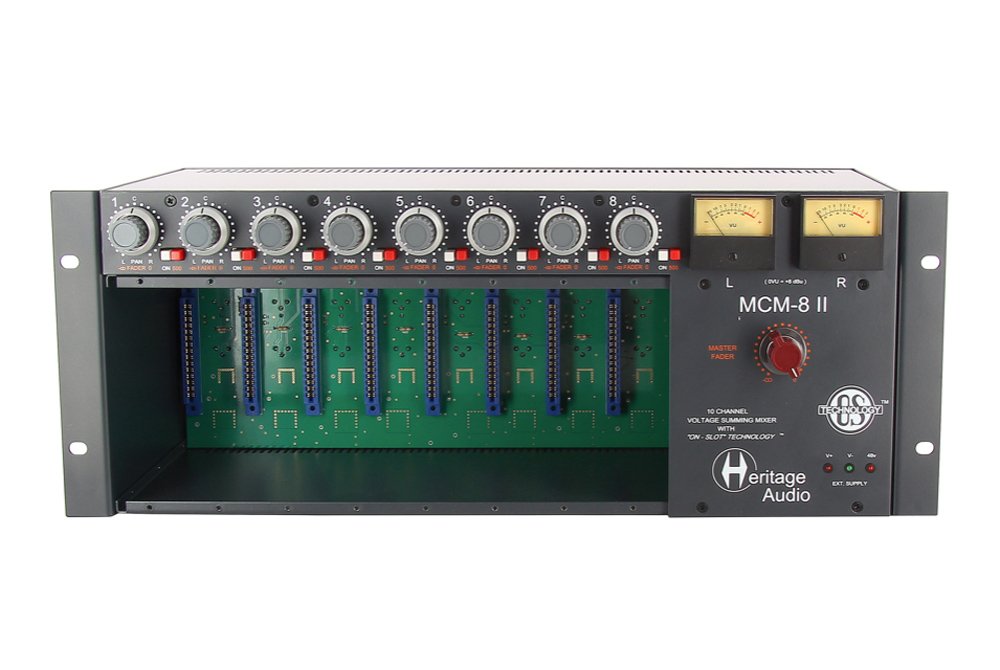 In 2015, Heritage Audio set a new standard in 500 Series enclosures with the addition of the OST technology. Further, we introduced the MCM8, a true transformer-based voltage summing mixer for 500 Series modules.Hundreds of units later, we have taken all our customer´s feedback and included it in the new version, the MCM8 II.

"ON SLOT TECHNOLOGY" takes advantage of last generation power electronics to handle power supply on a "per slot" basis. Each slot has its own power supply linear regulation stages; therefore modules are isolated from the rest. They just share the metal enclosure.

With literally hundreds of brands making 500 series modules, we at Heritage Audio think this is the professional way of handling this reliably, eliminating issues often associated with sharing power between different modules of different brands and natures.

Each slot features test LEDs for checking correct power operation (red for +16v, green for -16v), located aside of the slot connector.

Thanks to the use of OST, the power capability of the MCM-8 is 400mA per rail per slot maximum, with an overall of 1.4A (1.6A non continuous) per rail, whichever is reached first.

The RAF Blue Gray enclosure is made out of heavy gauge steel with an aluminum front panel.

There are Pan and Fader controls per slot on dual concentric potentiometers. Pan pots are center detent for precise center positioning. Features include an ON switch to assign each channel to the Mix Bus.

The Mix Bus follows a passive, voltage summing topology, similar to that found in the 80 Series consoles of the 70s. The gain loss is restored by the same Class A, 2n3055 driven, transformer based output stage used in the Heritage Audio 1073.

An additional Stereo Input is provided on the back of the unit, allowing several MCM-8 units to be daisy chained, or signals not needing further 500 series processing to be mixed together.

The central section has analog VU meters and a Stereo Master fader.

Connections are made by means of both gold plated XLRs and DSUB25 Input and Outputs, with Standard Tascam protocol.

Write a review about the Heritage Audio MCM-8 MKII