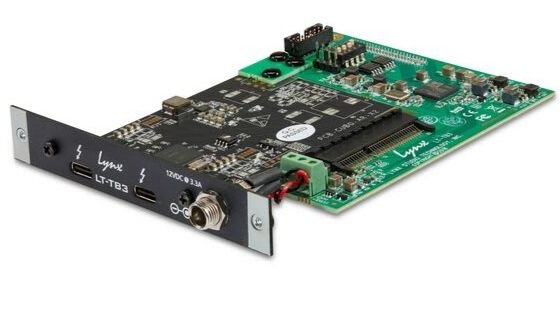 The LT-TB3 LSlot card can be installed into any existing Hilo or Aurora(n) with an easy and free firmware update. In addition, Lynx is making Thunderbolt 3 equipped Aurora(n) and Hilo models available at the same time. These models are:

"From its inception, the upgradeable LSlot feature was designed for both the Aurora and Hilo so that owners would not need to replace their entire interface each time a new or improved connection standard hits the market. It can be quite expensive and disconcerting for the customer. Regularly delivering new modules as well as firmware updates allows us to keep up with market demands for features and capabilities." Stated Bob Bauman, Co-Owner and Chief Hardware Engineer. "We could simply release new interface models with added capabilities every six months, or continue to add value with our current platform. We believe our customers would rather just download a free firmware update or easily add a new module to get a slew of new features and capabilities than entirely replace their interfaces."

"Thunderbolt 3 can support up to a 40Gbps bi-directional data rate and was primarily designed to handle the bandwidth demands of 4K video." explained Lynx Co-Founder and Chief Software Engineer David Hoatson. "Even with Thunderbolt 1 there was plenty of extra bandwidth for the demands of multiple channels of audio even at the highest sample rates. With Thunderbolt 3 there's even less strain on the data flow and much more bandwidth than we would ever need for multi-channel audio. And with the new Thunderbolt 3 computing devices our customers won't need any Thunderbolt adapters."

Write a review about the Lynx Studio Technology LT-TB3