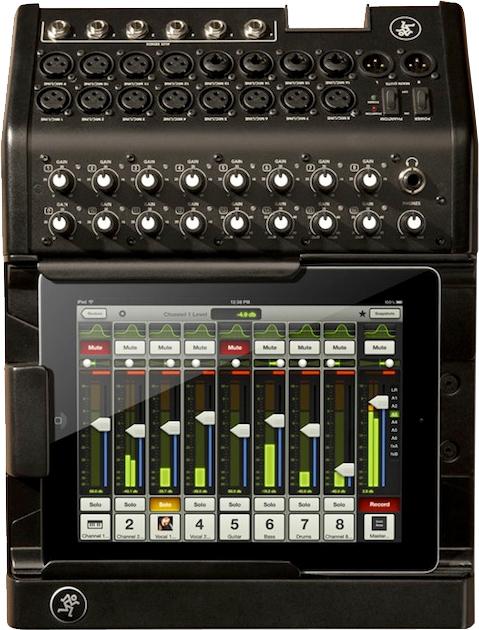 The Mackie DL1608 and DL806 redefine live mixing by combining the proven power of a full-featured digital mixer with the unmatched ease and mobility of an iPad.

The sleek and low profile 16-channel Mackie DL1608 is rooted in design innovation. Its powerfully small format destroys the industry's notion that "bigger is better" by allowing modern technology to eliminate the need for bulky boards and racks of gear.

The Mackie DL1608 redenes live mixing by combining the proven power of a full-featured digital mixer with the unmatched ease and mobility of an iPad. With 16 boutique-quality Onyx mic preamps and the performance of 24bit Cirrus Logic AD/DA converters, you have unparalleled sound quality. Seamless wired to wireless iPad control means you can mix from anywhere in the venue. This gives you the mobile freedom to control not only the mix, but also powerful plug-ins like EQ, dynamics, effects and more. The sleek DL1608 even supports up to 10 iPads. Forget bulky consoles and racks of gear. The power is at your ngertips.

Control the Mix from anywhere
With the Mackie DL1608's seamless wired to wireless mixing capabilities, you can mix in real time from anywhere in the venue on your iPad. Instantly adjust mix functions from tuning front of house trouble spots to ringing out stage monitors.

16 Onyx Preamps
The Mackie DL1608 comes loaded with 16 studio-quality Onyx mic preamps that deliver depth, headroom and immense detail to your live mix. Plus, with 12 XLR and four combo mic/line inputs, connecting mics and instruments is quick and easy.

24 Bit Cirrus Logic - AD/DA Converters
The Mackie DL1608's high-end 24bit Cirrus Logic AD/DA converters offer a remarkable 114 db dynamic range. We align our Onyx pre-amps precisely with the converters to provide you with the most headroom and the lowest noise and distortion possible-resulting in brilliant sound quality from a vocal whisper to a wailing guitar solo.

Tons of Built-In Processing (DSP)
The DL1608 is loaded with a choice of powerful plug-ins on every channel, so you won't need to set up additional racks of outboard gear. With just the touch of a nger, you have total control over 4-band EQ, compression and gate plug-ins. Plus, sweeten your sound with a full-featured reverb and tap delay or adjust your mix to the room with the 31-band graphic EQ and compressor/limiter on the main and aux outs.

Multiple IPAD Support
Supporting up to 10 iPads simultaneously, the Mackie DL1608 allows multiple engineers to control the mix. Plus, it gives band members the ability to adjust their own monitors. Now, the band can dial in the mix they want to hear in real time right on stage

Total Snapshot Recall
The Mackie DL1608 allows you to recall mix functions with just the touch of a nger. With Total Snapshot Recall*, you can now easily save and access sound check settings for multiple bands, complex song mixes, previous mixes from challenging venues, recall scenes for theater productions and more. You can even pre-set the mixing board and be ready to go the moment you arrive. *Mic pre-amp gains are not recallable.

Channel Presets
Quickly set up a new mix with the DL1608's Channel Presets. With simple touch screen control, you can immediately assign a factory or your own custom channel preset for kick drum, bass, guitar, keyboard and more to any channel you choose. And when you've made the perfect settings, easily save them for later use and share them with your friends.

Write a review about the Mackie DL1608