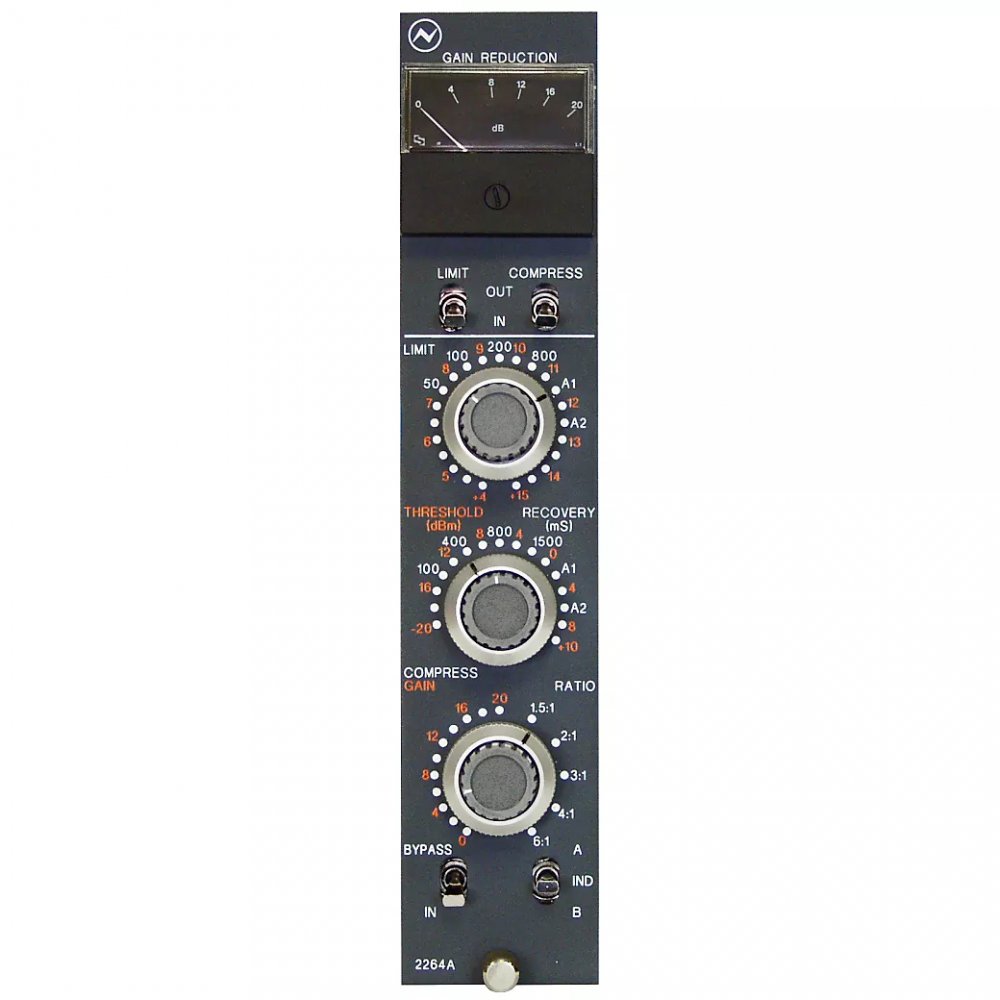 The AMS Neve 2264A is the Classic Mono Limiter Compressor with similar capabilities and performance as the earlier Neve 2254. (Vertical module)

Originally designed in 1974, the AMS Neve 2264A mono Limiter/Compressor unit quickly became a legend. Delivering similar facilities and performance as the earlier 2254 Limiter/Compressor type, it did so despite being packaged in a more compact form factor. Discrete, Class A/B design and transformer-coupled circuits used in the input, innovative bridge-driver design, side-chain and output stages ensured a totally unique sound. The original 2264A units are still sought after, decades after production stopped, and they remain one of the milestone pieces of studio equipment.

Now crafted in England by Neve engineers, the classic 2264A is available again.

Not only does it retain the original 2264A's unique sonic characteristics by using the same architecture, matching components and original hand-wound transformers as its historic counterpart, but it is also available in both vertical and horizontal orientations. Being electrically and mechanically the same D.L.1 format as the Neve 1073 and 1084 Mic/Pre modules, the 2264A can be inserted into any compliant console or rack that houses the 1073 or 1084 module types.

General
Input: 10,000 , bridging, balanced and earth-free.
Output: Balanced and earth-free.
Maximum output into 600 : 26 dBm.
Gain: Nominally 0 dBm, with +/- 2dB gain variation available by means of a preset potentiometer mounted on the module rear panel. Compress & Limit thresholds are defined in relation to the output level when terminated to 600 .
Bypass Switch: In the OUT position, the output terminals are connected to the input terminals directly.
Control Voltage Ganging Switch: Enables the control voltage to be derived either internally or can be externally connected to one of two control voltage ganging positions. Positions A & B of the switch select these buses while the central position selects the internal control voltage.
Noise: (Measured between 20Hz and 20kHz): RMS output noise does not exceed -75dBm with no gain make up, or -55dBm with 20dB of gain make up applied (only when COMPRESS is selected).
Frequency Response: Relative to 1kHz, response is within +0, -0.5dB over range of 20Hz to 20kHz
Distortion (Measured at 1kHz, distortion does not exceed the following):

Write a review about the AMS Neve 2264A CH