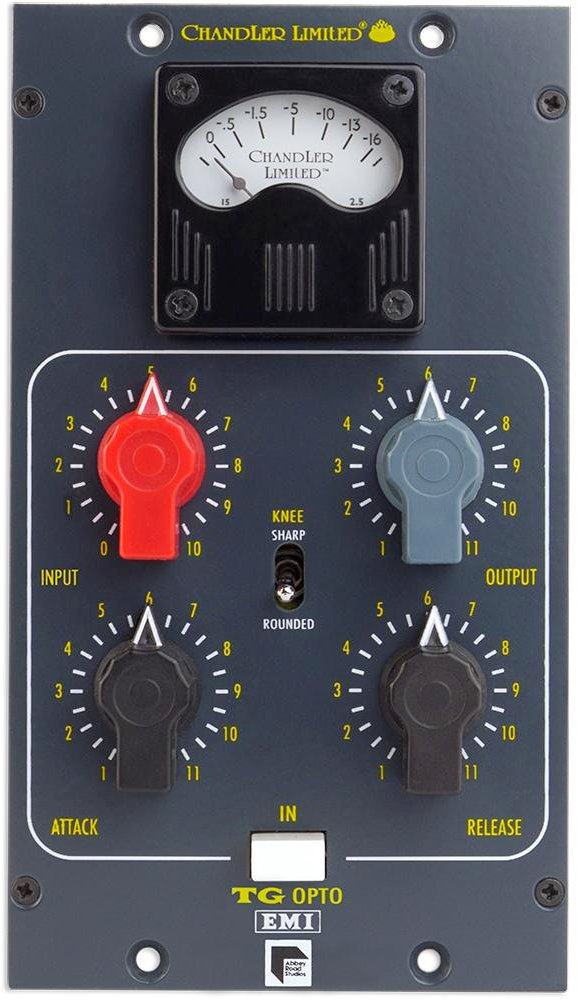 The TG Opto for 500 Series is a relative of the TG1 Opto, found in Chandler Limited's TG Microphone Cassette, the TG1 Limiter and Zener Limiter, and traces its lineage to the historic EMI TG12413 limiters found on the TG12345 mixing and mastering consoles of the late '60s and early '70s.

The TG Opto compressor control-set includes: selectable sharp and rounded knees, continuous input, output (makeup gain), attack, release, and true bypass.
The attitude of the TG Opto is one of two personalities, each actuated by the selectable sharp and rounded knee types. In sharp, the TG Opto is capable of explosive drum sounds, and set to rounded, it is well suited to scenarios where the artifact of compression is required to be less obvious or gentle.

The continuous control-set affords the ability to fine-tune compression to respond to an array of sources and create a variety of tones.

Create your own TG console channel today by adding the TG Opto compressor, TG2-500 preamp and TG12345 MKIV equalizer to your 500 Series rack!

Chandler Limited is the only company in the world authorized to develop, manufacture and market the "Official Equipment" of EMI/Abbey Road Studios.

TG HISTORY
Conceived from meetings in 1967 between Abbey Road engineers and EMI's Central Research Laboratories technical team, the EMI TG12345 desk (later known as the Mark I), would usher in a sea change in sound and flexibility at Abbey Road Studios.
The new transistor based EMI TG12345 recording console was modular in design, with twelve dual channel microphone cassettes. The TG desks featured expanded EQ, and for the first time ever, a compressor/limiter on every channel. The compressor was originally supposed to replicate the sound and behavior of the Fairchild 660 and RS124 tube devices, but ended up with a completely unique character.

Installed in Abbey Road's Studio Two in November 1968 and making its debut on an 8-track recording by the Shadows, the new transistor desk marked a departure from the earlier REDD valve consoles. The following year, the EMI TG12345 desk helped shape the sound of the Beatles' final album, Abbey Road, which was markedly richer sounding to that of the band's earlier work. The sonic qualities of classics like "Here Comes the Sun," "Come Together" and "Something" would have been very different without the EMI TG12345.

The desk encountered many revisions throughout the '70s and became the main recording console used throughout the studios until 1983. The EMI TG12345 console Marks I-IV were used on everything from Pink Floyd's The Dark Side of the Moon and Wish You Were Here to John Lennon's Plastic Ono Band, George Harrison's All Things Must Pass to epic film scores including Raiders of the Lost Ark.

The EMI TG12345 recording consoles were never commercially available to the public.

Write a review about the Chandler TG Opto

5.0
Mike Mathieson
Toronto
August 30, 2018
Great!
This is one of my favourite compressors. I had been using it in the microphone cassette and wanted another on it's own. It's really versatile with the two knee's and variable attack and release. I like the punch it has when set to be punchy, it's not sharp, but a nice rounded punch, and in my opinion is aboslutely stellar. Read more
Great tone, great job by chandler.
View more products from Chandler