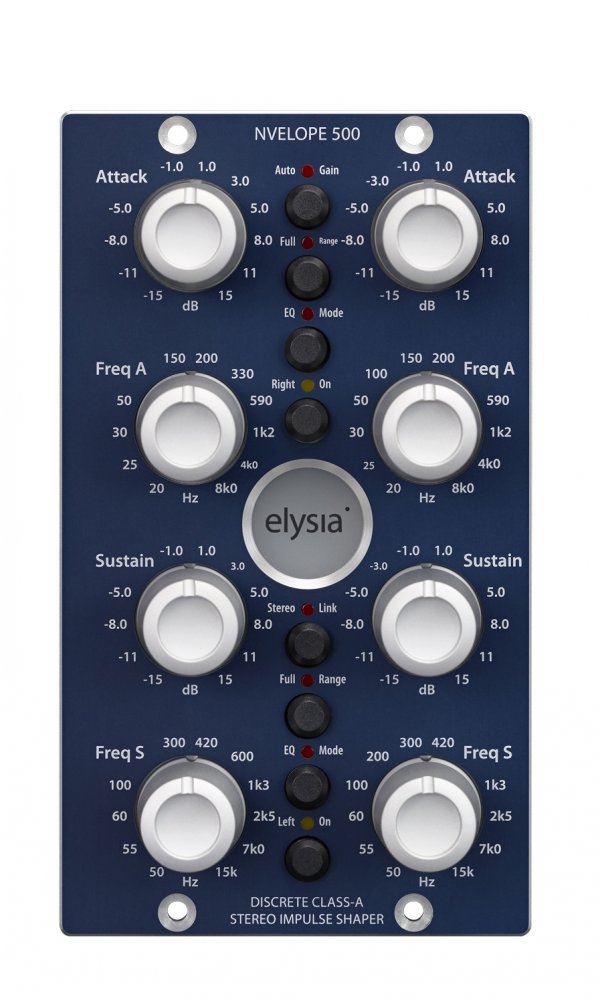 The Nvelope 500 is a powerful dual slot audio processor capable of making subtle or drastic changes to a sound by providing control over its attack and sustain characteristics.

This is extremely useful for reshaping all sorts of individual tones, and is a wonderful tool in any mixing situation as well.
The nvelope 500 operates independently of the specific level of a signal, and (unlike with compressors) you do not have to spend a lot of time trying to balance a set of complex controls to quickly get the results you seek.

With its unique Dual Band mode, the nvelope 500 gives you enhanced control over processing, and can easily handle complex program material. Additionally, its dynamics sections can be bypassed, allowing it to function as a flexible high/low shelf EQ...

Discrete Class-A Topology
As a true elysia specialty, the audio path of the nvelope 500 is completely based on discrete circuitry and does not use any integrated circuits at all.

To explain the advantages of discrete circuitry we'd like to present a comparison that might seem a little odd at first: audio technology vs. cooking! If somebody uses instant meals exclusively, he will have to accept whatever comes out of the box. A creative cook, however, focuses on his own special recipes and ingredients.

In this respect, integrated circuits (ICs) are pretty similar to packet soups: they are cheap, mainstream and they simply do not match haute cuisine. So if you want to design an analog audio device 100 % according to your own demands and ideas without any compromise, there will be no way around a discrete design.

The nvelope 500 follows this philosophy consequently. Its complete audio path is a new design which is based on the exclusive use of high grade discrete components. A truly unique recipe!

In addition, our signal shaper operates in permanent class-A mode. This means that the transistors are always conductive, resulting in the absence of crossover distortion and providing a pristine sonic base: the general sound character is always wide, open and punchy.

Full Range Mode
In Full Range mode, the attack and sustain intensity of a signal can be raised or reduced fast and efficiently with just two controllers.

The nvelope 500 is a powerful audio processor capable of making subtle or drastic changes to a sound by providing control over its attack and sustain characteristics. This is extremely useful for reshaping all sorts of individual tones, and is a wonderful tool in any mixing situation as well.

The nvelope 500 operates independently of the specific level of a signal, and (unlike with compressors) you do not have to spend a lot of time trying to balance a set of complex controls to quickly get the results you seek.

Full Range mode is especially fast and easy to use, as all you need to do is dial in more or less attack and sustain by turning their specific controllers to the left (reduction) or to the right (increase).

Similar to a compressor and unlike in Dual Band mode, you can use the Freq A controller to reduce the influence of low frequencies on the attack processing (higher frequency = less bass influence).

Dual Band Mode
This mode functions basically the same as Full Range, but it provides more tweakability by assigning the attack and sustain controls to individual frequency selectors.

The unique Dual Band mode of the nvelope 500 takes you to the next level of impulse shaping. The attack and sustain parameters become much more flexible by selectively processing a certain frequency range chosen by the user.

So it is pretty likely you'll find yourself using the Dual Band mode in any situation where you would like to adapt the way the nvelope 500 processes more individually and on material which tends to produce unwanted artifacts in Full Range mode.

Generally speaking, Dual Band mode gives you more distinct processing options and the possibility to even cope with complex material like a summing bus.

EQ Mode
The nvelope 500 can mutate into a two band equalizer with a high/low shelf characteristic, and even here the channel link for processing stereo material can be activated.

A very nice side effect of the topology of the nvelope 500 is that it can also be used as a shelving filter. This is achieved by temporarily deactivating its dynamics sections while keeping the the filter stages active.

The special architecture also allows for another nice feature which is kind of hard to find on other EQs: Not only can the two channels be used as two separate equalizers at the same time, but they can be linked for processing stereo material conveniently as well.


Mixed Mode
When Stereo Link mode is not active, the two individual channels can be used as completely different processors at the same time.

The nvelope 500 really gets the best out of the two rack slots it sits in. It can be two channels of Full Range or Dual Band impulse shaper or shelving EQ, which can be operated stereo linked or dual mono.

Or, you can connect the output of channel L to the input of channel R, and then process the frequency response of one single signal with the EQ first, followed by some nice Dual Band impulse shaping.

As you can imagine, there are lots of possible combinations...

Dual Mono/Stereo Link
For ultimate flexibility, the nvelope 500 offers true dual mono and linked stereo operation as well - no matter if you are using it in Full Range, Dual Band or EQ mode.

The header says it all, but you might want to have a look at the possible channel combinations resulting from this. Ultimate flexibility!

Auto Gain
Should distortion or huge jumps in level occur as an unwanted side effect of the attack processing, the Auto Gain function will compensate and get the level right.

Boosting the attack in Full Range mode can sometimes result in some pretty huge level peaks. These can make your processed signal sound uneven, and in the worst case they will create the nasty kind of distortion you don't want.

The nvelope 500 solves this very conveniently with the Auto Gain function. This simple button makes the impulse shaper automatically compensate stronger level peaks, so this can be the solution for many level-related issues caused by the attack processing.

By the way, Auto Gain is typically not needed in Dual Band operation and therefore not offered in this mode. Also, Auto Gain does not have any influence on a channel operating in EQ mode.

Stepped Potentiometers
The frequency potentiometers have 41 steps for an easy recall, while the gain pots have a center detent for finding their neutral position at once.

The nvelope 500 features fully stepped potentiometers for its frequency controllers.The 41 steps make a precise recall very easy, and they provide a useful range of possible settings at the same time. And you will just love the feel of them, too ;-)

For the gain controllers we have decided to use potentiometers with a single center detent instead. During the development process we noticed that finding the neutral position for 'bypassing' a processing section at once comes in very handy...

Write a review about the Elysia Nvelope 500