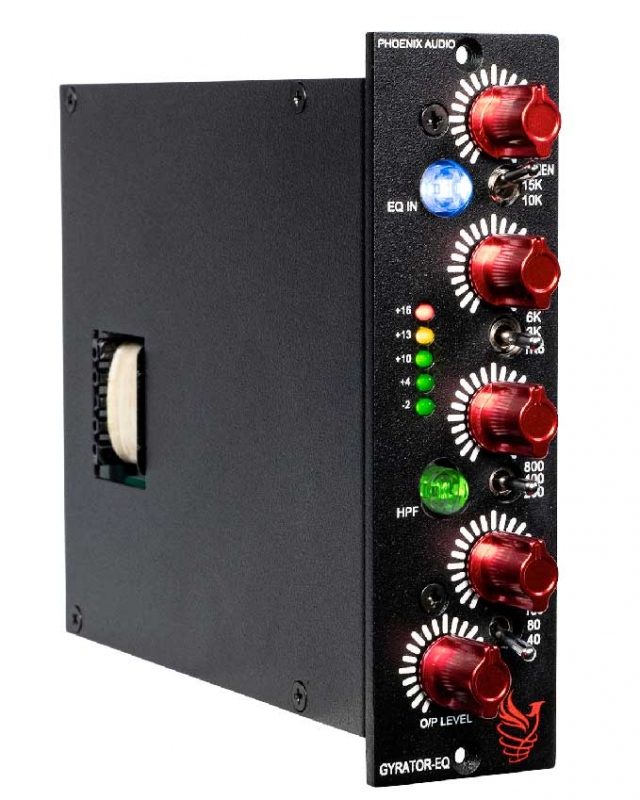 Phoenix Audio's Gyrator EQ is one of today's most unique and musical EQs, allowing an incredible variety of sounds useful for everything.

An EQ As Versatile As It Is Unique
From clean high-headroom mix buss tone shaping to deep frequency carving to smooth Class-A circuit saturation and available either as a mono 500-series module (running at 24v) or coupled to two of our remarkable Class-A Ascent Mic Preamp/DIs in a stereo 1RU unit, the Gyrator EQ is as powerful as it is fun to use.

4-Bands of Gyration
The Gyrator EQ was first developed during what most consider the golden age of solid-state analog audio design: the 1970s. Originally designed to emulate the characteristics of an active inductor EQ (think Neve, API), the Gyrator EQ uses a rather clever combination of an amplifier, resistors and capacitors to accomplish incredibly smooth and musical frequency modifications. The modern-day Phoenix DRS Gyrator EQ gives you High, High-Mid, Low-Mid and Low frequency bands, each notched to proven frequencies from a shimmering 15kHz on down to a thumping 40Hz. There's also a high pass filter at 80Hz, which can eliminate rumble or be used "against" low-end boosts for an extra range of unique EQ curves (think: Pultec). Even at extreme boosts and cuts, the Gyrator EQ's uniquely musical filters maintain the core quality of your original signal, allowing you to make bold, gut-level EQ moves that won't sound harsh, slurred or out of phase. Used more subtly, these four filters are capable of highly coherent tone shaping suitable for full mixes and mastering.

Driving the Output Circuit for More Tone Shaping
Phoenix Audio's renown DSOP-2 output amplifier, with its custom-wound transformer, is able to deliver everything from ultra-clean signals with abundant headroom to fat, fully saturated tones. By driving the output attenuator, one can drive the DSOP-2 output stage for a wide variety of lush, Class-A saturation. Many engineers even use the Gyrator EQ completely flat in order to simply add the musicality of our proprietary amplifier circuits.

Versatile And Effortless, Day After Day
The Gyrator EQ is a powerfully versatile, high-quality studio tool. Unlike many Class-A EQs that just do "their thing" due to inherent distortion characteristics, the Gyrator EQ keeps the input signal clean, making it possible for the engineer to keep tones transparent or saturate them to taste. Importantly, doing so is effortless and intuitive due to the DRS Gyrator's straight-forward design and unerring musicality. Those who own this EQ tell us that it quickly becomes their "go to EQ"-used effortlessly every day across a vast variety of instruments, voices and full mixes.

Sheen Control
Sheen control adds a beautiful breath and presense to vocals and instruments which need to come to life, with 16db control this gives great flexibility & power to really boost this or to cut if unwanted HF is present.

Write a review about the Phoenix Audio Gyrator EQ 500