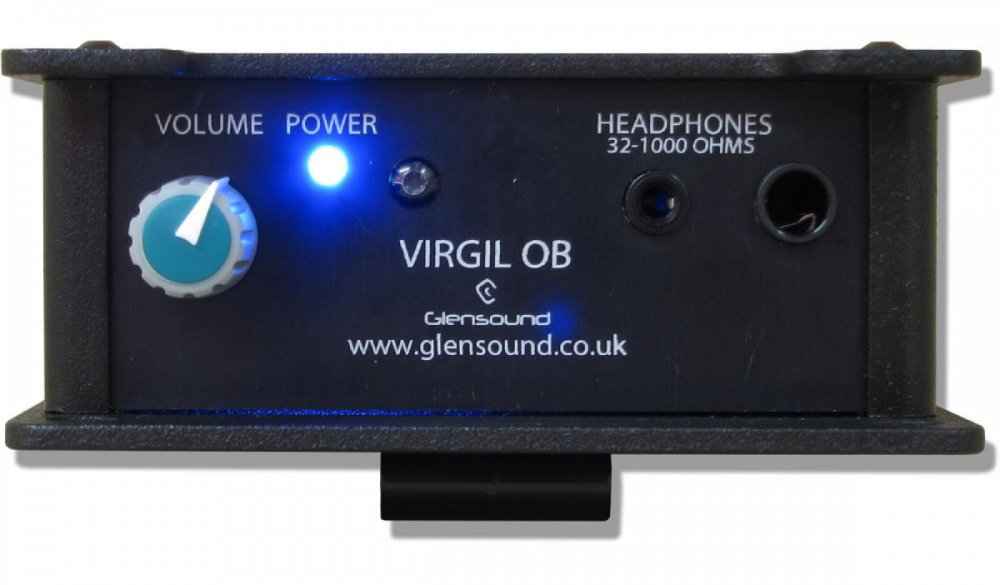 Virgil was the Roman poet who guided Dante through Hell and Purgatory, the Glensound Virgil OB is a clever little headphone amplifier for providing crystal clear audio into studio & broadcast headphones.

Packaged in a small & robust format and designed for outside broadcast & theatre applications wherever a headphone circuit or analogue output is required, the Virgil OB provides a simple interface between Dante / AES67 network audio systems and users headphones or other analogue audio equipment.

The Virgil OB encompasses our unique headphone amplifier circuit which automatically provides the correct output level to match the impedance of the attached headphones (to produce the same volume high impedance headphones require a much greater output level than low impedance).

Virgil OB receives 2 x audio circuits from a Dante / AES67 network and routes one to the left and the other to the right channel of the headphone amplifier. A front panel volume control allows the user to adjust the output volume of the headphones.

The 2 incoming audio circuits are also presented on a pair of balanced analogue audio XLRs on the rear of the unit. A switch on the side of the unit sets these 2 outputs to be post or pre fade of the front panel level control.

The Virgil OB is housed in a robust but lightweight aluminium casing that has been proven to withstand the rigours of life on the road. It also features a hardwearing beltclip allowing the unit to be quickly and securely attached to both people and infrastructure.

As well as being suitable for low & high impedance headphones our unique headphone amplifier circuit can be connected to both stereo headphones & mono earpieces, making the Virgil OB suitable for driving television presenters ear pieces.